We share our insights and information about biologic drug development, including: innovative technologies that save time and create efficiencies with a goal of getting novel drugs to patients FASTER.

Biosimilarity: It starts by selecting the right manufacturing cell line

The recombinant therapeutic patent cliff has ushered in a new promise for access to less expensive biologic therapies, called biosimilars. Just recently, in fact, the US Food & Drug Administration approved the first biosimilar for the treatment of certain breast and stomach cancers, known as Ogivri (trastuzumab-dkst) – which is a biosimilar to Herceptin (trastuzumab). 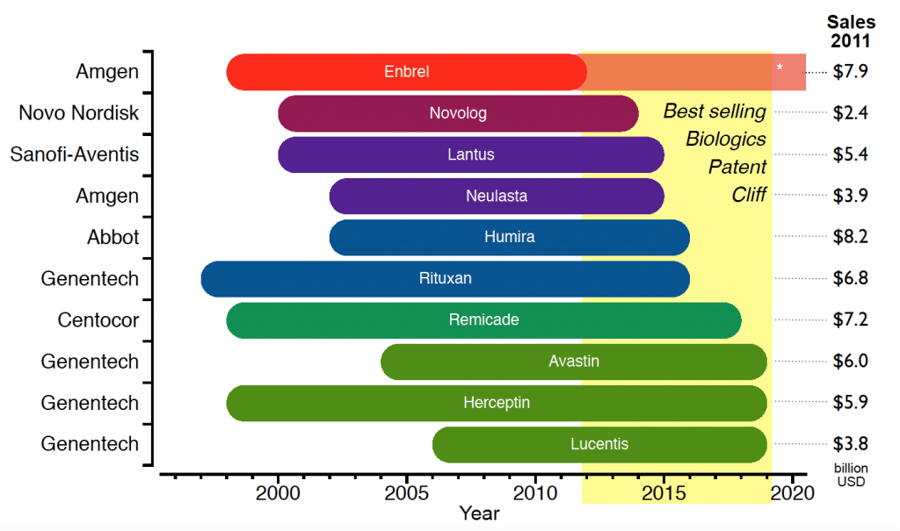 Biosimilars, also known as follow-on biologics, are “almost identical” copies of approved recombinant drugs manufactured by a different company than the original marketed product and that exhibit no clinically meaningful differences in safety and activity. Examples of marketed biosimilars include hormones, growth factors and monoclonal antibodies (MAbs). Just like their small molecule counterparts, they are marketed as cheaper alternatives to innovator drugs, once the original drugs go off patent.

It is often assumed biosimilars are easier to manufacture than the innovator product. While this may be the case for small-molecule generics, the opposite is more often true for biosimilars, particularly for any biologics with post-translational modifications.

Small variabilities in feed strategy, cell line stability or even cell line generation can have a significant impact on the glycan profile. That is why it is very important to generate and choose the right manufacturing cell line up front.

The development of biosimilars and biologics is a highly complex and multifaceted process. Biologics are comprised of high-molecular complexity and can be quite sensitive to changes in the manufacturing process.  For biosimilar production, generating manufacturing cell lines and optimizing manufacturing scale-up requires tight control and detailed analytics to ensure that the biosimilar composition profile fits within the originator’s specs. There are far fewer degrees of movement in this type of development. For example, if an innovator drug was manufactured in a Chinese hamster ovary (CHO) cell line, the biosimilar needs to be made in CHO cells as well.

CHO cells are not just tools, they are living organisms that require expert handling for optimal and long-term results. Poor and unskilled handling can result in the cells evolving over time and inconsistent productivity both in quantity and quality. As a result, only the most experienced cell line organizations can consistently make high-producing, high-quality cell lines for a range of innovator products and even fewer are able to make high quality cell lines for biosimilars.

The biggest challenge with CHO-generated biosimilar products is ensuring enough similarity in glycan profile to the originator. Small variabilities in feed strategy, cell line stability or even cell line generation can have a significant impact on the glycan profile. This is why the generation and selection of the right manufacturing cell line is critical. Typically, cell lines that have already been used for biosimilar production are better understood and often result in getting the right cell line earlier in the process. This saves time and money while reducing the chances that the biosimilar product will have slight differences resulting in antigenicity.

As evidence of what Selexis can do in this arena, we just announced that Selexis and Turgut Pharmaceuticals expanded their partnership to work together to develop a high-quality biosimilar for the treatment of two rare diseases. Originally established as two commercial licensing agreements in 2016, the agreement has proved so successful in the development of biosimilar therapeutics that this third agreement is now a reality.

This news is a testament to the ability of Selexis’ SUREtechnology Platform to ensure a glycan profile similar to the originator, which is a key challenge in the development of CHO-generated biosimilar products. Selexis has met that challenge, and has consistently helped to generate numerous biosimilars, including marketed products, with glycan profiles matching these originator products.  Turgut and Selexis researchers were so impressed with the data for their initial partnered projects for certain cancers and inflammatory diseases, that a third project was a natural outcome.

Selexis is a key player delivering on the promise of biosimilars, and may also play a role in ensuring that emerging countries will eventually have access to such therapies.  As the demand for biosimilars has grown, Selexis has been able to quickly support partners’ biosimilar programs by generating cell lines producing clinic-ready biosimilar material. Our speed and efficiency is due to our long-term experience (more than 12 years) with our proprietary CHO cell line. The significant investments we have made in decoding its genome, transcriptome and secretory pathway allows us to have a solid understanding of what to expect from glycan product profiles. Additionally, we have numerous in-house tools for tweaking the cell lines if the glycan profile (or any post-translational modification) ends up out of spec. Through our biomanufacturing partner, KBI Biopharma, we have access to a breadth of analytics, which provides us even more data to choose the optimal cell clone. The smallest change in the glycan profile can result in antigenicity, so we place a great deal of emphasis on analytics to avoid that possibility.

SUMMARY Novel biologics have been used to treat many life-threatening diseases. The promise of biosimilars to expand patient access to these treatment options is huge. However, that promise starts with extensive cell line development experience, the highest quality cell line generation capabilities and a commitment to only the highest quality science and analytics.

Selexis SA, a JSR Life Sciences company, is the global leader in cell line development with best-in-class modular technology and highly specialized solutions that enable the life sciences industry to rapidly discover, develop and commercialize innovative medicines and vaccines. Our global partners are utilizing Selexis technologies to advance more than 140 drug products in clinical development and the manufacture of eight commercial products. As part of a comprehensive drug development process, the Company’s technologies shorten development timelines and reduce manufacturing risks. More information is available at www.selexis.com.